Hell is a building uptown

I love dreaming. Maybe that sounds strange, but it's one of my favorite activities. When I am fortunate to remember them, it’s better than going to the movies. But I have  to write them down. I've found that if I don't, my recall gets worse and worse until I feel like a slab of cinderblock. That's probably true for most people.
If you think about it, recalling a dream must be incredibly beneficial for your brain. Just simply going through the process of recollecting each detail and writing it down, probably rewires things in a major way. Basically you are syncing the left and right sides of your brain, bringing them into harmony, building bridges between the two. It's probably equivalent to something like 20 crossword puzzles. If we are just talking brain diet.
I had been slacking in my writing as of late, and it was really irritating me, so the other morning I committed to writing until my dream spewed out. After about a page and a half, it finally surfaced after I wrote: I want French Toast. haha, suddenly I remembered that in my dream I had been eating takeout while sitting on the banks of the . Brilliamt what sorts of things trigger the memories.
So here's my evidence that writing down a dream really enhances the ability to remember. Today I woke up with my dreams as clear as if I had just walked in the front door with my shoes still wet. It works!
If you are in for a random story, here's my dream from last night:
I was walking uptown, scouting a good building to start a community center. There were some men hanging out on a stoop in front of an old-style barber shop, so I struck up a conversation, asking them about the vacant building next door. "Is anyone renting that? Who would I talk to about a possible lease?"


The guy casually replied, "Oh, you can't rent that building, it's Hell."
"Huh? You mean there have been some supernatural sightings, or it's haunted or something."


"No, it's Hell," he said smoking and looking unconcerned at the abandoned building next door. "But.. you can go in there if you want."


"Sure," he shrugged. "You just have to make sure to cover your head when you go in and out. There's an electromagnetic field that you have to protect against."


“That sounds about right, thanks for the heads up.”


I got some burlap and some friends. We went around to the back alleyway. The building looked like any other brownstone with a shabby backyard. The gate was unlocked, so we put some burlap on the crown of our heads and opened the diamond wire gate. The yard was overgrown and strewn with dead grass and dirt. It looked almost exactly like the picture below. 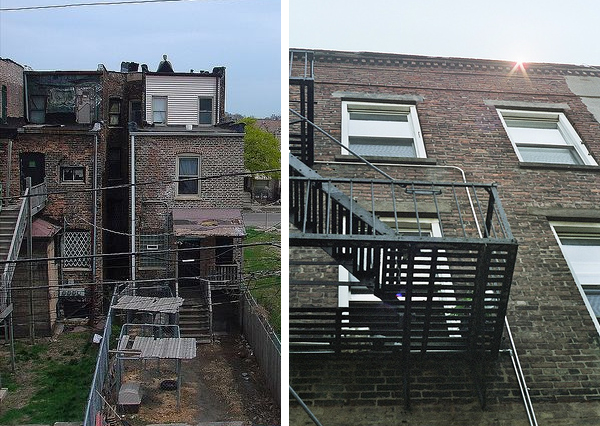 I was feeling incredibly pensive about this endeavor, but had made up my mind to go and no amount of fear was going to stop me. I grabbed my friend’s hand and we made our way up the fire escape. On the landing, there was an old woman sitting at a desk wearing glasses with the chain that dangles from the sides like a librarian. Looking closer I discovered that she was not really human. Her skin had the consistency of a toad, but she was minding her own business, so I did the same.


We opened the door and then tried to adjust our eyes to the darkness inside. To my surprise, the place was packed with people, like some hip club! Loud music was pumping out of the speakers, and gothic chandeliers gave the interior a red luminescence. We walked along the second floor, which opened in the center to the same activity downstairs. With a lot of trepidation, we pushed through the crowd. At first I avoided looking at other people, afraid they would be contorted or grotesque, but by the time we had walked the entire length of the upstairs, the people around seemed to be just that - regular people.
Downstairs we found card tables and a bar. A waiter walked past with a platter of fine Italian beer. He offered me one, so I cracked it open and watched on as a bunch of people played Blackjack. I turned to my friend, “You know, I’m not a big fan of bars, but considering where we are, this is not THAT bad.” 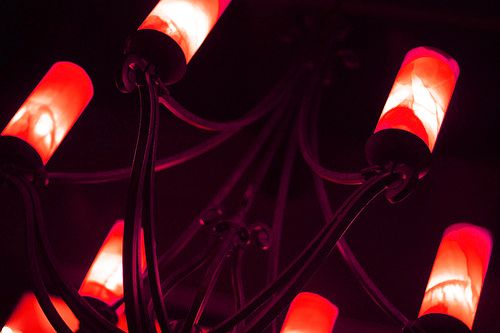 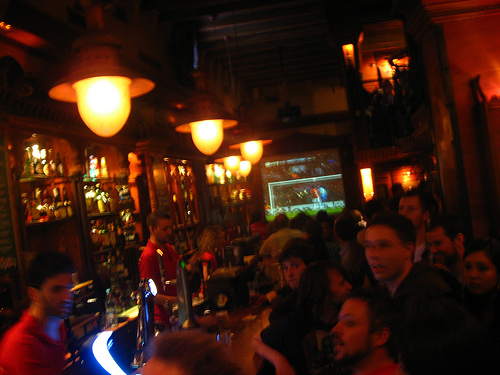 My companion was about to respond when a hush fell over the crowd. The music abruptly stopped and people started shrinking away to the corners of the room. I heard a whisper in the crowd that He was coming. I didn’t need anybody to tell me who He was. I grabbed the friends that were closest to me and said, “We better get out of here, now.. before anything goes down.” It felt like something out of the Master and the Margarita.


We were just a few paces away from a revolving door, remnants of a bygone era, where the building was probably once an old department store. In the rush, I had lost the burlap cloth. We found some paper on the ground and placed it on our heads to exit the revolving door. (Thinking back, this seems strangely like a yarmulke – though I’m not Jewish or a guy for that matter).


I pleaded for my friends to come out with me, but a few were just enjoying chatting at the door and were clearly in no rush. One kid went through the door without protection on his head to show-off. "Yeah, it kind of hurt," he said, but shrugged and went back inside again. From the street, I could see them all hanging out in the entryway. Then through the tinted glass, I could make out the form of a gigantic black cloak moving into foyer.


There was a guy next to me leaning against the brick wall; he was watching the figure through the window too. “Why won’t they get the heck out of there?” I said, turning to him.


“Yeah, I don’t know.” I was expecting more concern from him, but he just watched with disinterest.


I tried to see what was happening inside, but it was only later that the show-off kid was carried out on a gurney. He was not dead someone said; the Master of Hell had taken pity on his stupidity. I thought that was interesting. So evil takes pity on ignorance too.

Email ThisBlogThis!Share to TwitterShare to FacebookShare to Pinterest
Labels: dreams 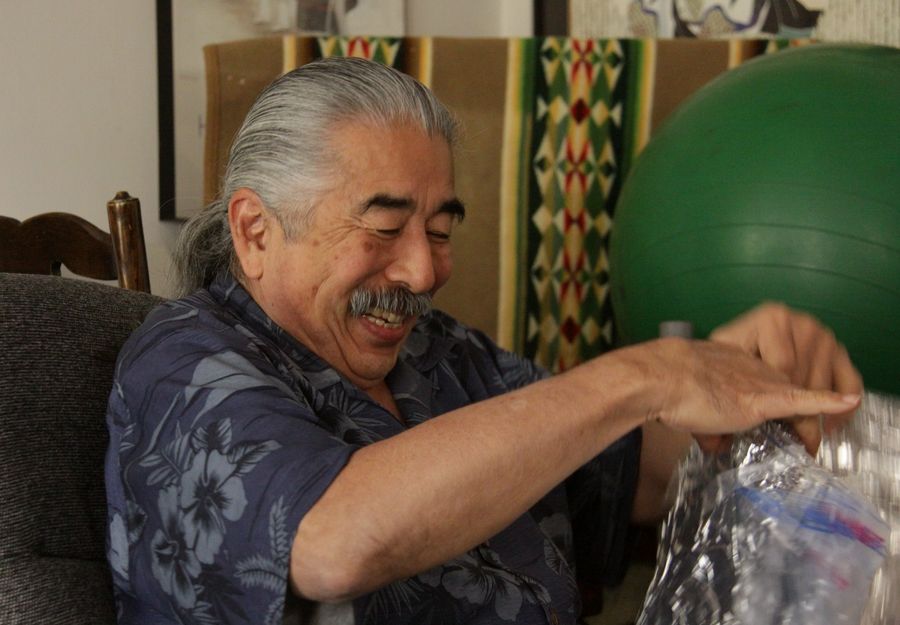 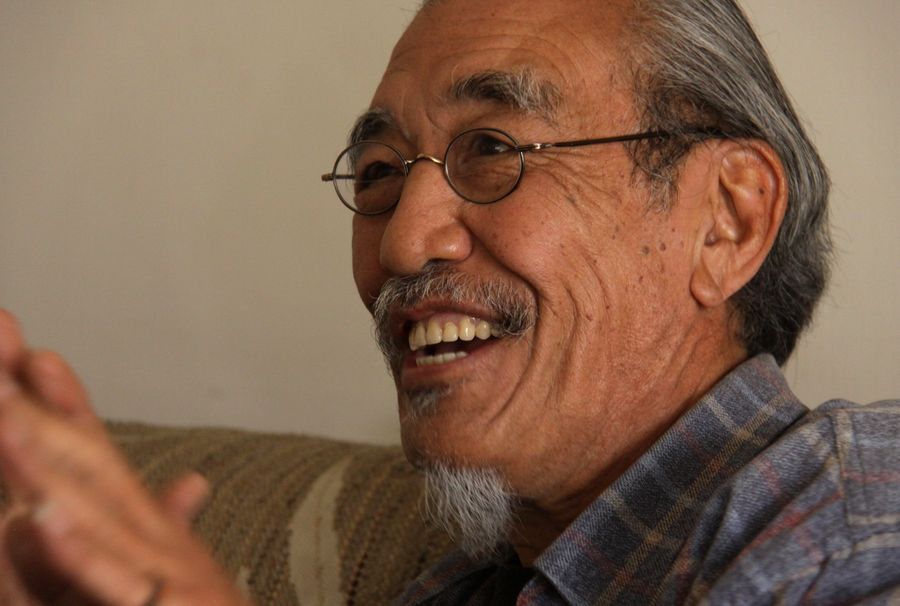 He is a great inspiration. About two years ago, he went to the doctor and they told him that his blood sugar levels showed that he was prediabetic. They also found some spotting in his lungs that they thought was cancer. He freaked out and came to the best natural doctor in the world (Shibat of course).

Dr. Shibat put him on a strict program. First, the diet: only organic meat, no processed food or anything out of a box or bag, no sugar, no bread, only raw milk or diary products (point of contention in CA right now), only brown rice, only fresh vegetables and fruit. Suga had been a smoker for 50+ years, so he had to stop smoking and start walking every day. Suga followed the program religiously. Do you know how hard it is to stop smoking after 50 years?!

He lost 20 lbs. and when he went back to the doctor three months later, his sugar levels were normal, his lungs were spotless, he had a clean bill of health. They couldn’t figure out what the heck happened.

It's great inspiration for anyone who might have a similar prognosis from the doctor. Unfortunately, western doctors tend to give medication and casually mention healthy diet and exercise. Some people think a healthy diet is Cracker Barrel or Applesbees. Most doctors don't do much to change that misconception. The focus should be on a healthier lifestyle. It's not easy, but reclaiming your health really can't be. It's hard  work. 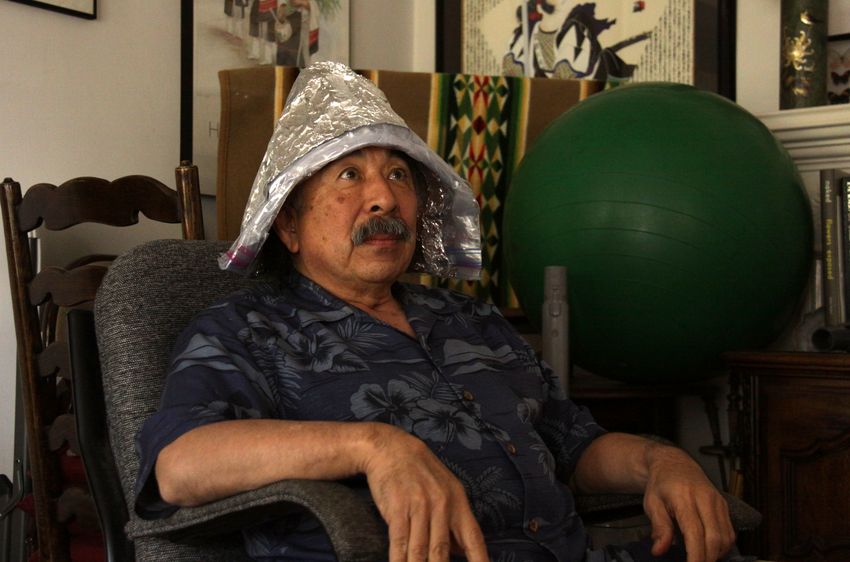 goofing around.. beam me up.. 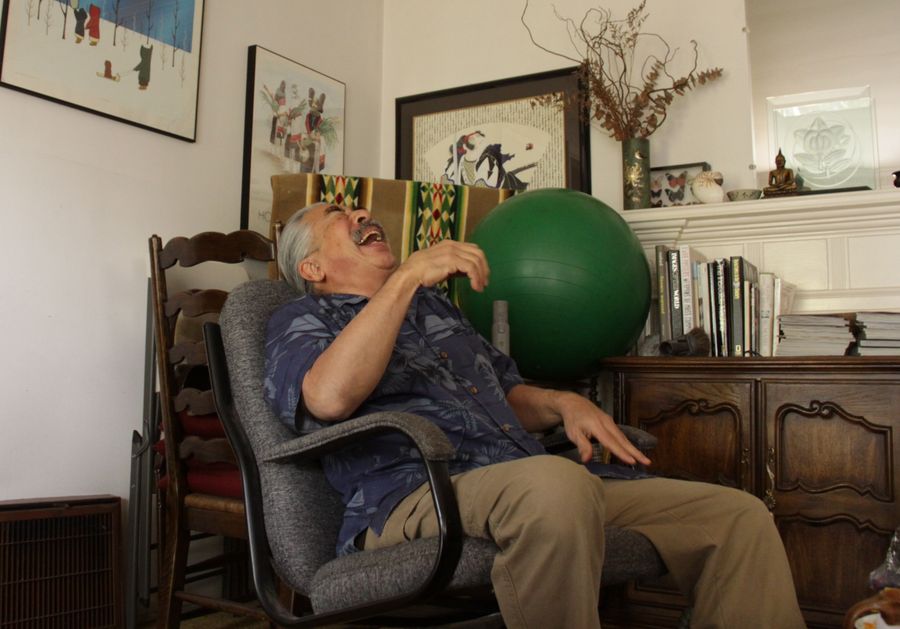 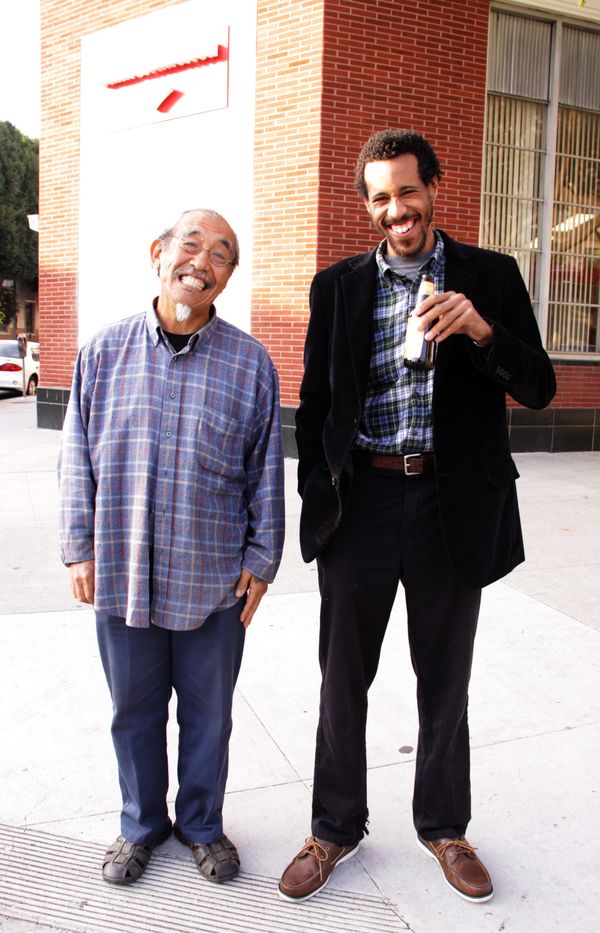 Revival of the cholo pose 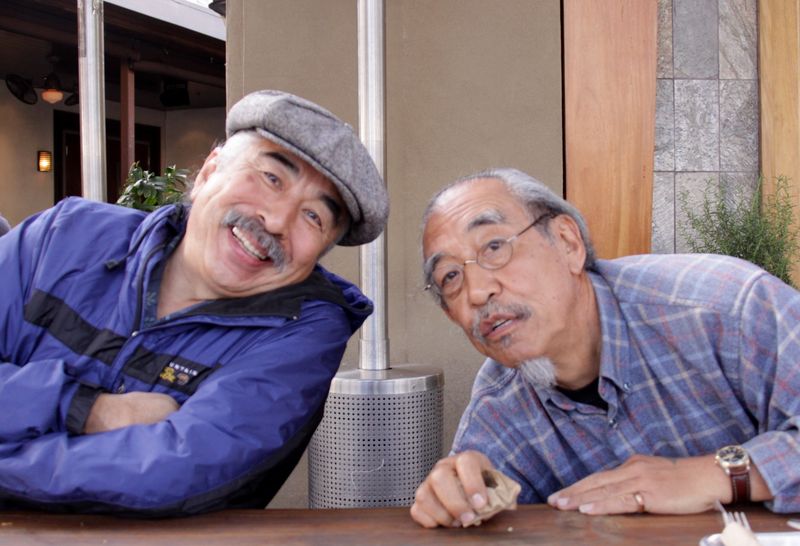 This is what I will miss most about LA.
1 comments