Thank you for checking out the Cambodian New Year pictures. Since we are celebrating and all, I thought I'd pull out a couple of pictures from my past trips to Cambodia for you to see. Really this is just an excuse for me to look at them. I do miss the sights, sounds, smells, and people.. especially the people from Cambodia. It's driving me a little mad, but then I won't get into all that. 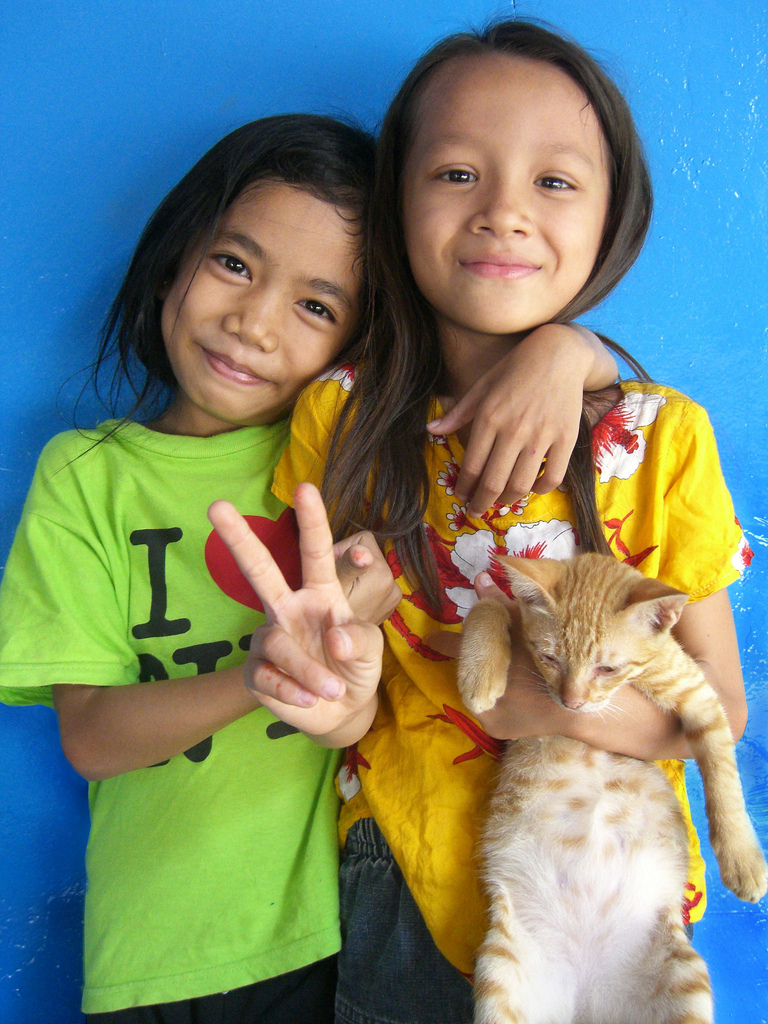 I know what you are thinking, "Oh no the poor cat!"
This little thing was such a trooper. 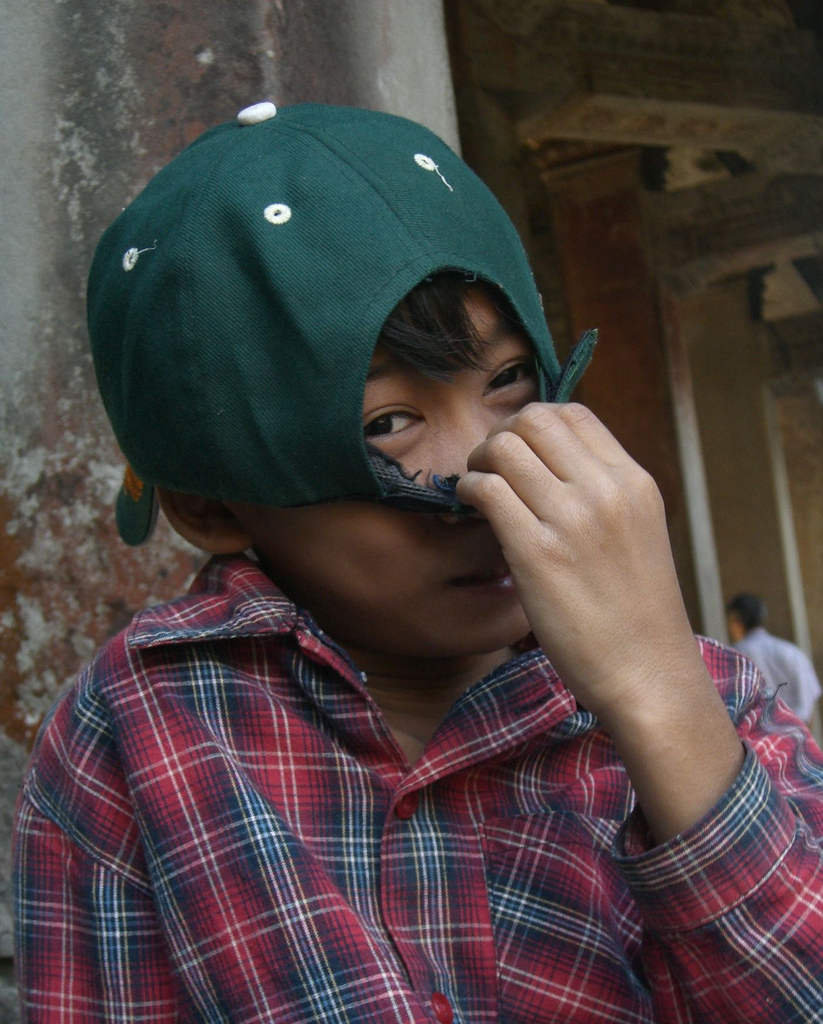 He is the quintessential little boy with bugs in his pockets
and a mischievious grin. 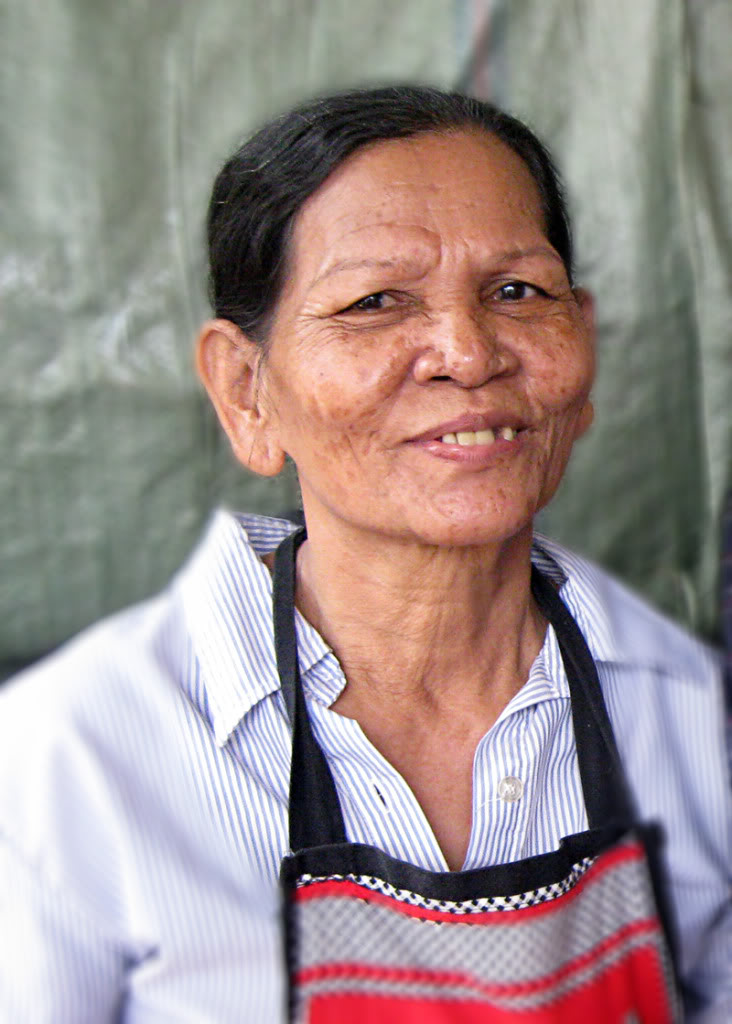 They call her grandmother even though she's only in her fifties.
She works at a coffee shop and always has a big pair of galoshes on. 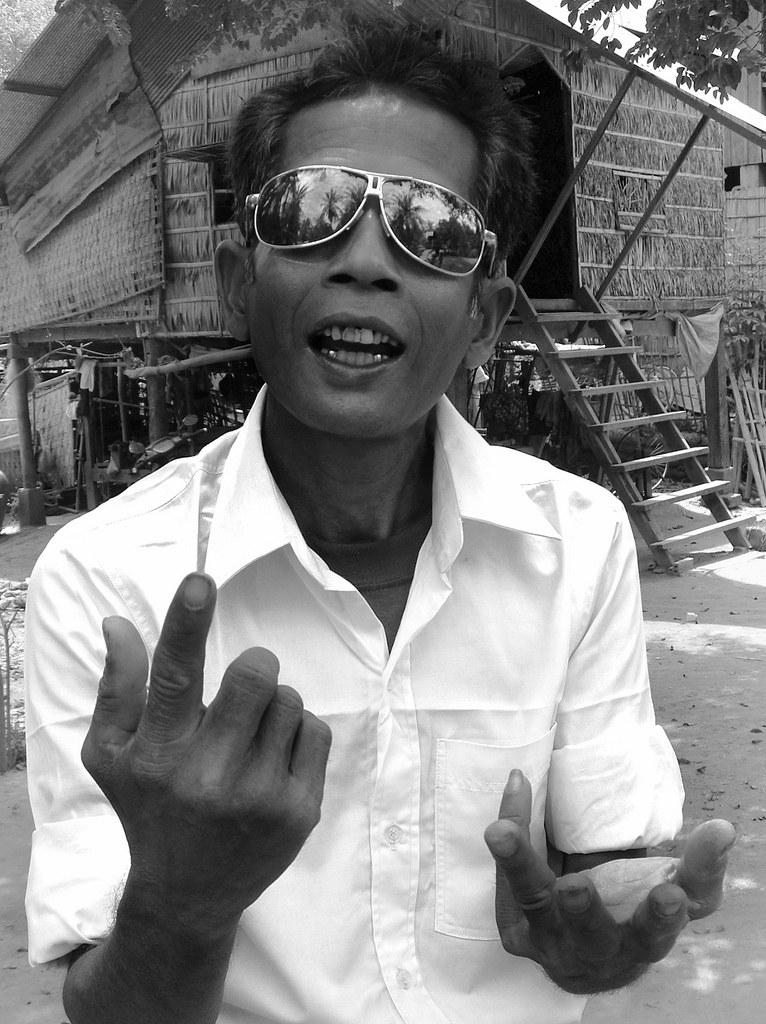 Met him on Silk Island where they make many of the famous Khmer scarves.
Some people just have naturalstyle. 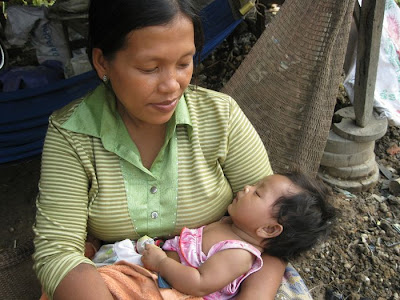 This is a very sad one. She is the mother of at least six children.
They live at the city's landfill. This was her newborn.
I told her the baby was beautiful. She told me I should take it. 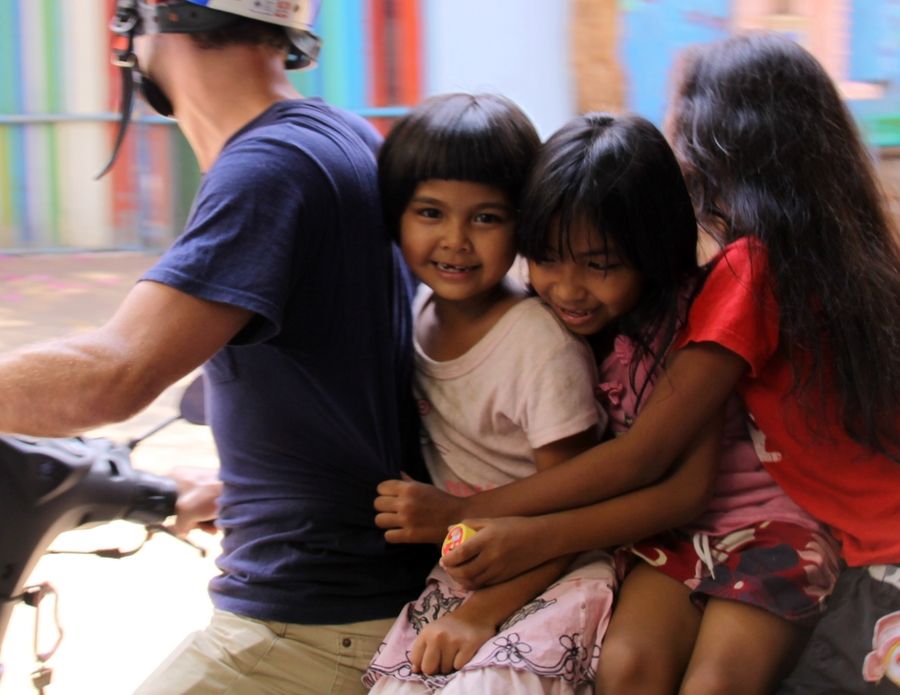 This little imp is trouble, but in a good way.
Before she was living on the streets, so she's tough. Not an ounce of fear. 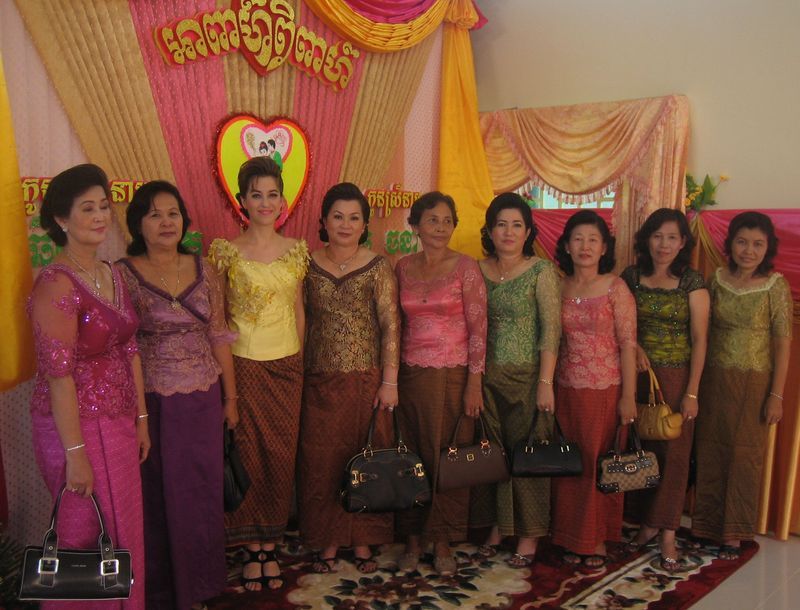 This is just for fun. You may or may not recognize the one in yellow. ha!
They worked for hours to do make-up and hair. The only extentions they had were black - so they had to make my brown hair look like highlights. By the end all of the women thought I was half-Cambodian. Amazing what a little make-up can do.

It was like an alternate dimension. Looking in the mirror, I was horrified. I thought two things: who is this crazy person, and I will be ridiculed when I go downstairs to this party. I was so wrong. Our ideas of beauty are so different. It's really fascinating. Everywhere I went at the wedding people stopped me and told me how beautiful I looked. And not just, "You look pretty." They gawked, "Oh My Gosh, You are SO Beautiful. So Beautiful. I can't believe it." They would just stand there and hold my hand. It was the trippiest, funniest thing ever.
3 comments 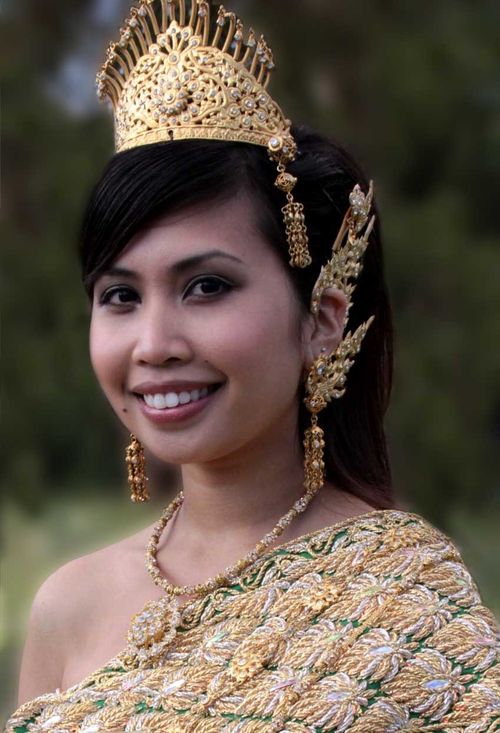 I have a couple of pictures to share from Cambodian New Year in Long Beach on Saturday.

I will tell you, it was a hero's trial trying to get into this festival. We wanted to ride our bikes, but were stopped by bulky security at the entrance. No biking or walking, can you believe that? You had to drive your car into the park and clutter up the grounds with vehicles. You'd think a city sponsored event would encourage eco-friendly transportation.

Aside from that, it was fairly expensive, which made the whole scenario so strange. Biking back to the car via the aqueduct, we passed tons and tons of Cambodians trying to sneak into the event from the fields behind the park. 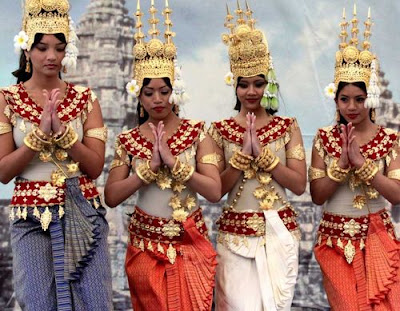 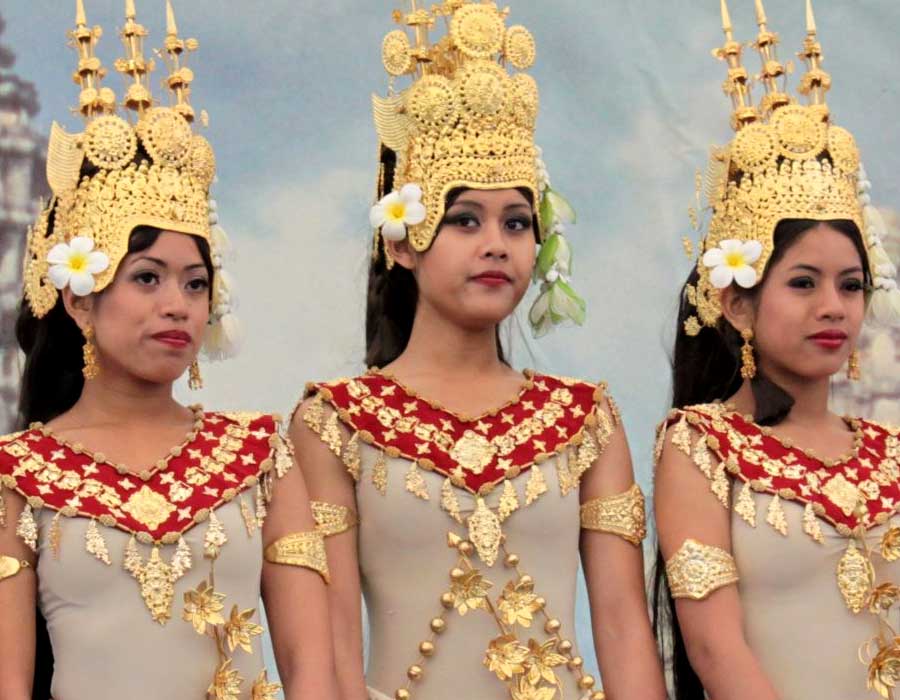 Apsara dancers
Apsara are mythical celestial dancers that date back thousands of years. You can see the carvings of apsara on the temple walls at Angkor Wat. It's not the only form of dance in Cambodia, but I think it is probably the most popular. The movements are very subtle and graceful. Each pinch of the finger is full of symbolism relating to harvest and myths from ancient Angkor. Though the steps are simple, the form is very important. Little girls begin training as early as five, memorizing the precise posture and stretching their hands and feet daily to create the graceful bend. 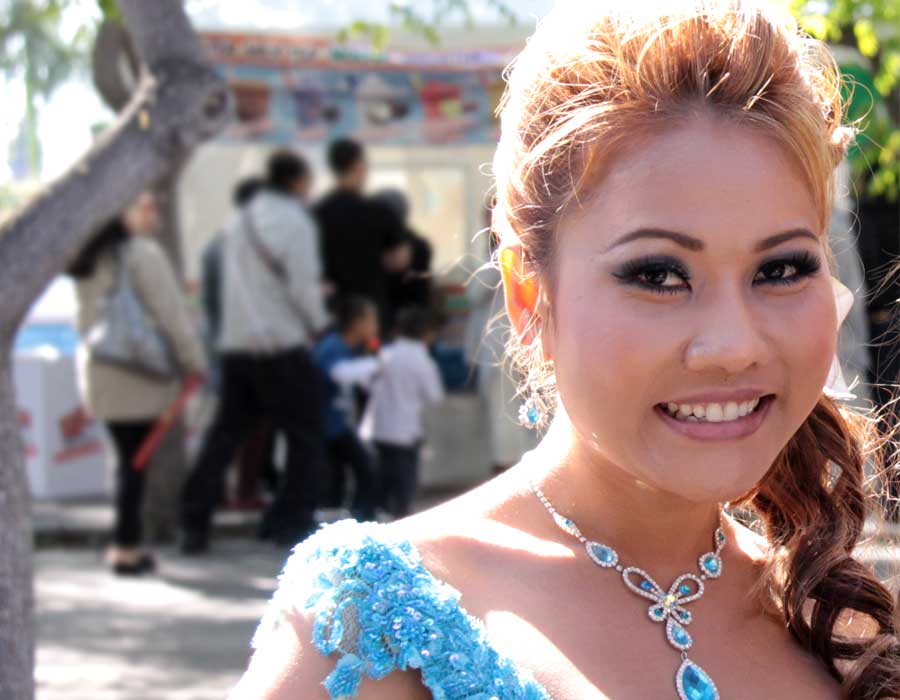 This is one thing I love about Cambodia. Even though the country is struggling with poverty, corruption and the aftermath of devestating genocide, still the people appreciate and love art. Music and dance thrive.
We met this sweet singer after her performance. There was one song that J particularly liked (he likes to remix the songs too). 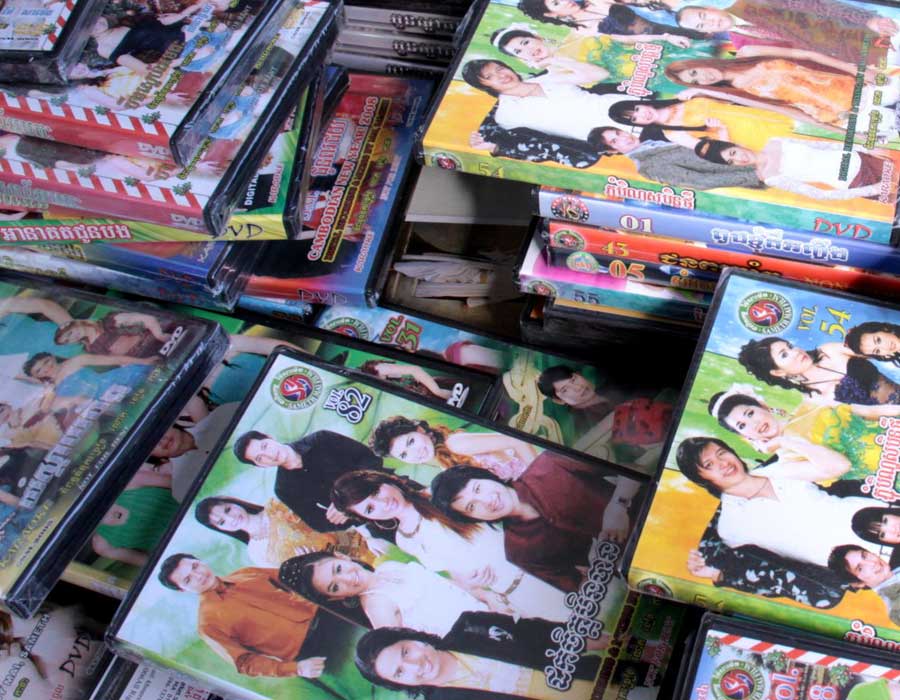 We dug through the CDs and DVDs at all of the outdoor vendors. Karaoke videos are a priceless piece of Cambodian culture. The music video industry in Cambodia is huge. They have pop stars that are household names no matter where you go, and ongoing video series that you can collect. We dug through so many, but couldn't find The song. 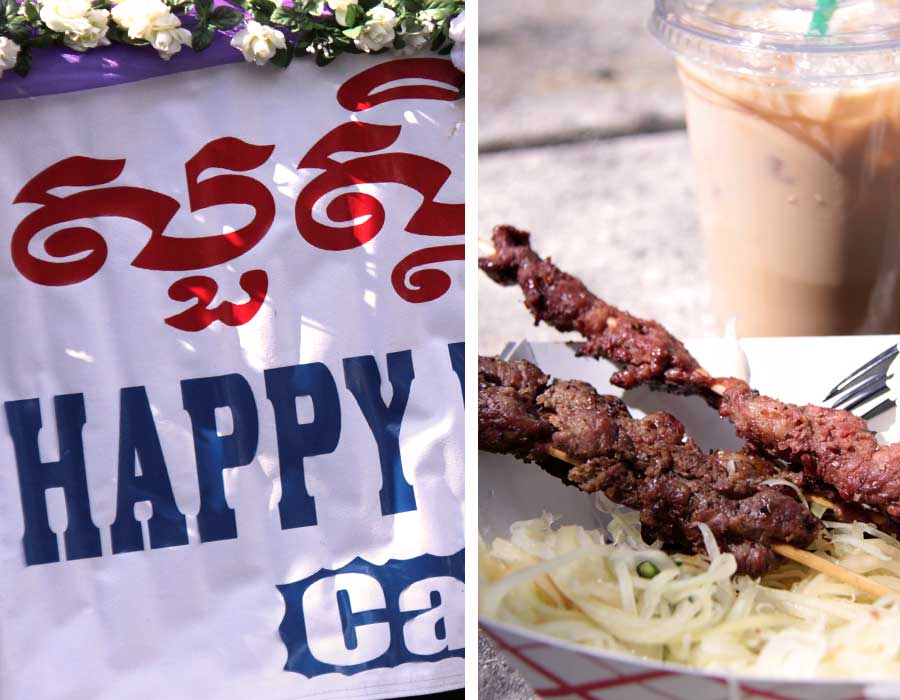 As we were scoping out the food stalls, we got into a conversation with an enthusiastic volunteer from Project Angkor, an organization that provides medicine to people in rural areas. We talked for a bit, then he took off and returned a few minuets later with a ton of food (and coffee : ) From that point at least three different groups of people offered to either buy or give us food. The generosity never fails to amaze me.

Two women across from us were smugging liquor in water bottles and kept telling us, "Shhh. Do you want some? Yeah? Shhh." They were eating crawfish. One woman was saying, "When I cook, mine are better. But I cry!" I thought she was talking about the bad crawfish she was eating, but then she said. "I cry! They came out of the pan, and I cried. I had to put the top on. So I don't make them anymore.... but I still like to eat them." She gave the funniest look, "what can you I do?!" 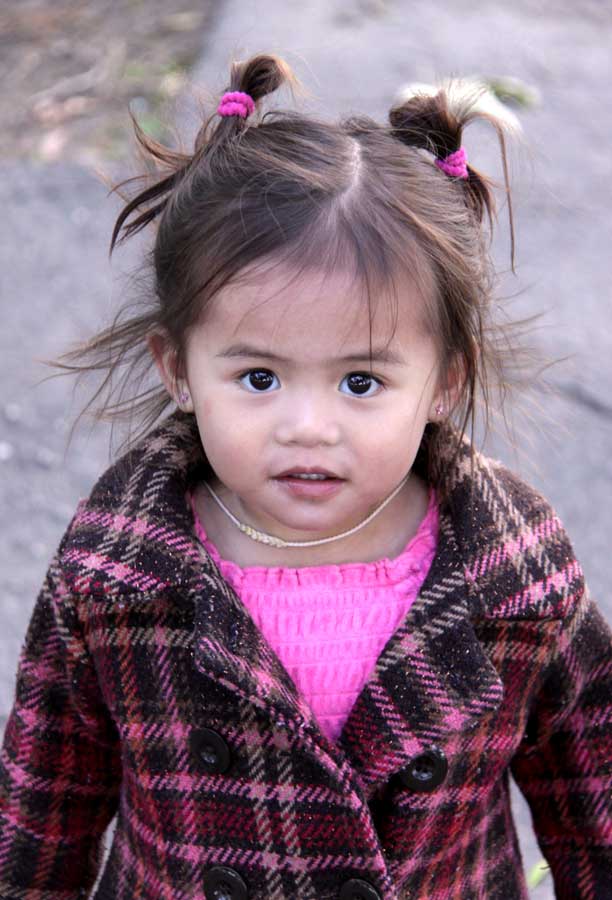 The event was a field day for kids. There were tons of games and activities for them. 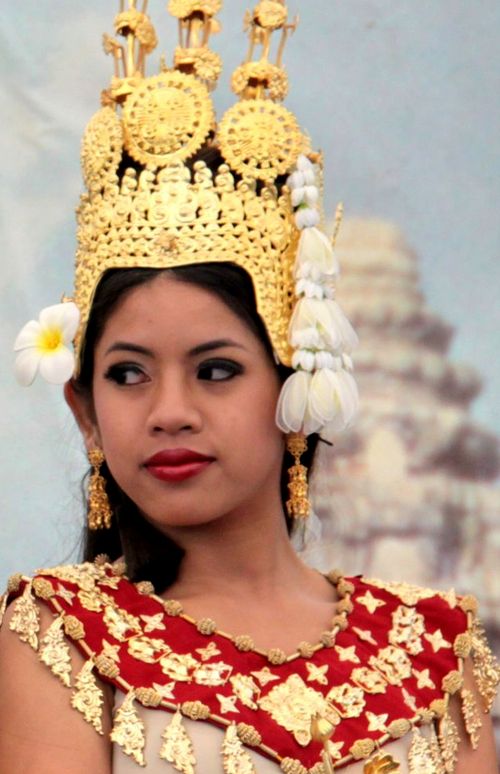 Probably the highlight for me - the costumes 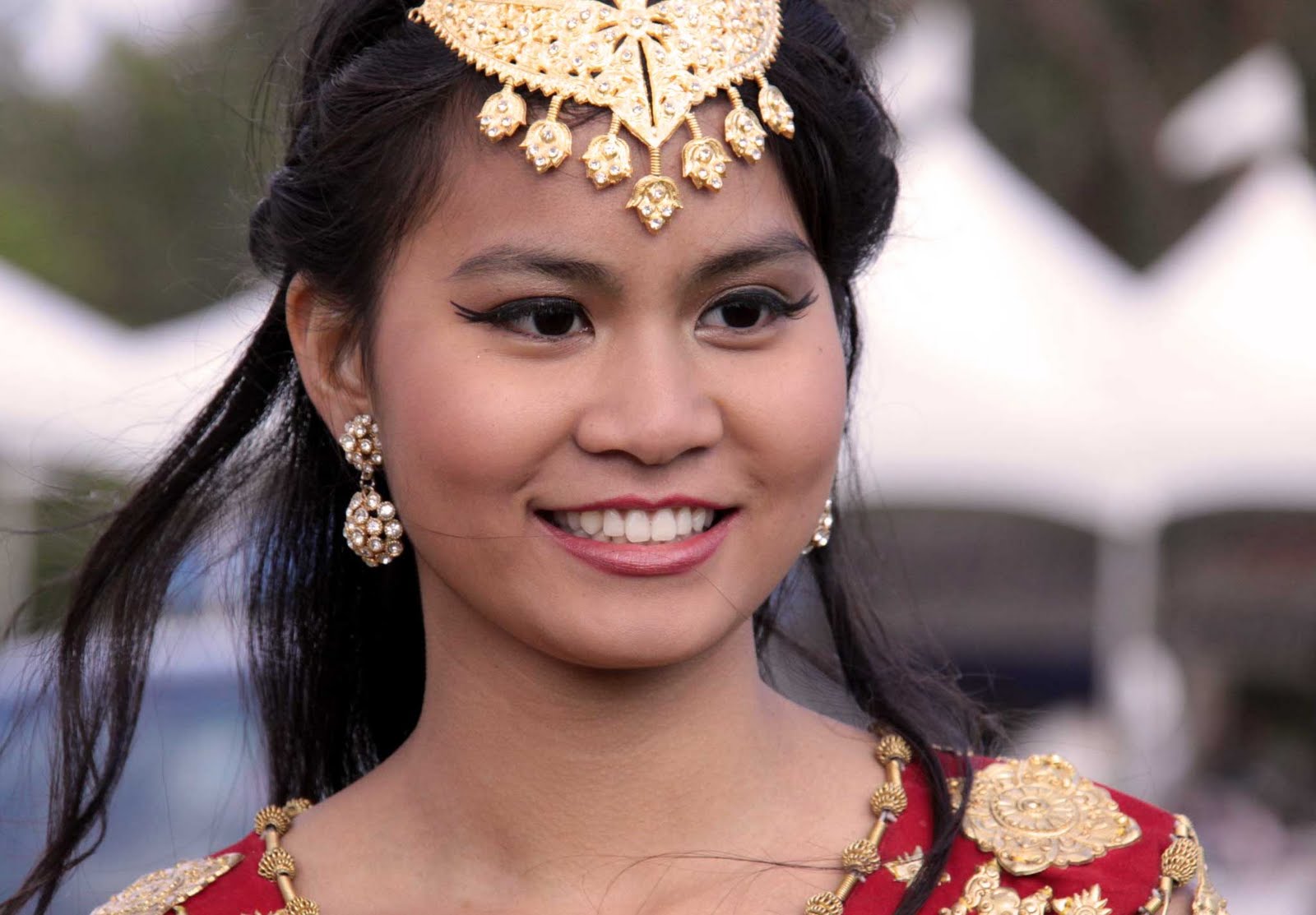 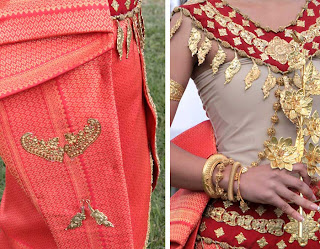 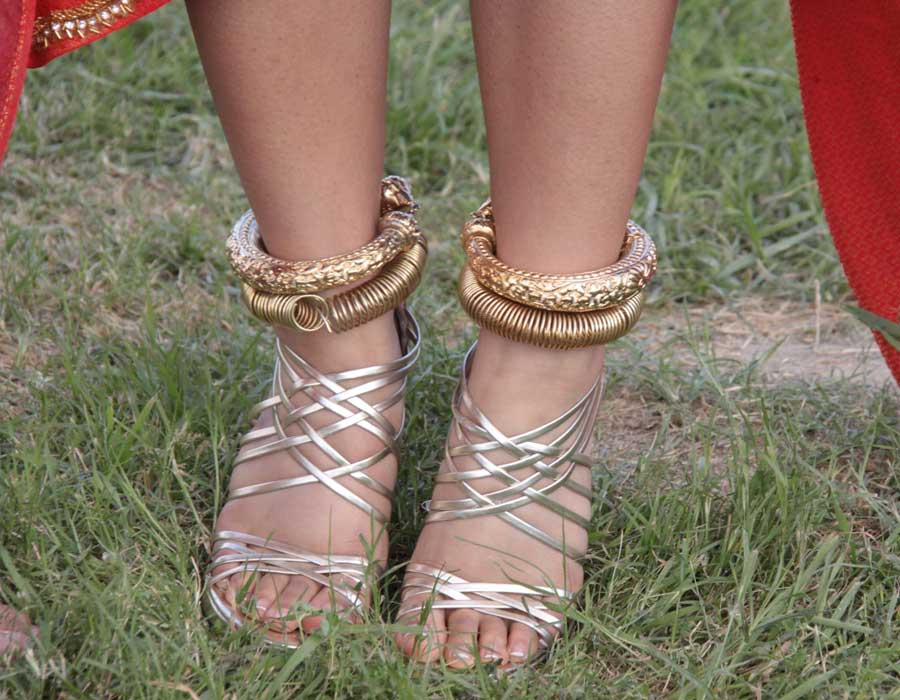 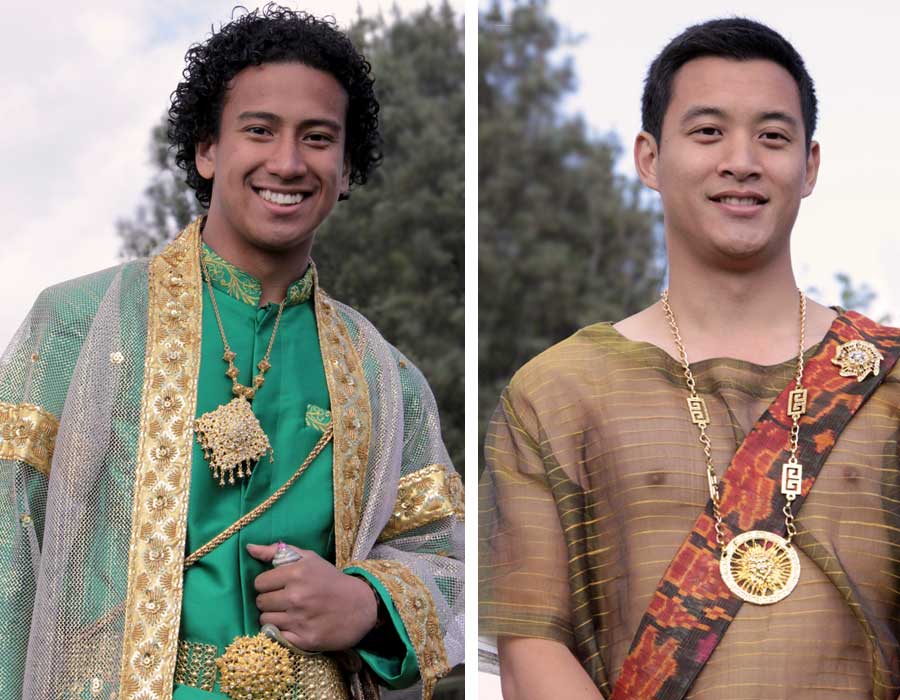 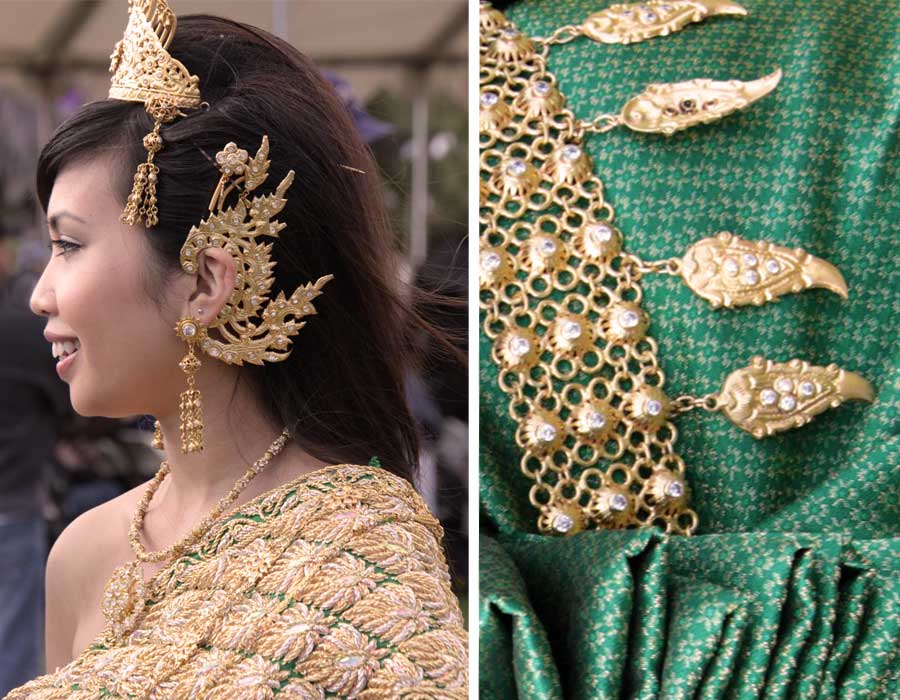 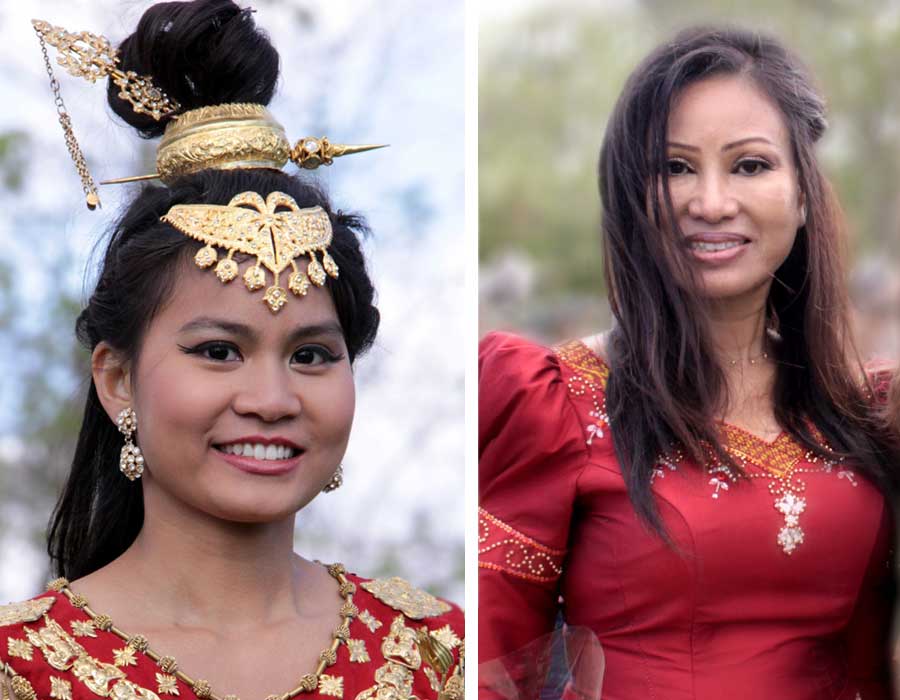 As I was taking pictures, I ran into the designer (on the right) who was there promoting her new business. I wasn't able to do a proper interview as I would've liked, but I did get to ask her a few pertinent questions.

Name: Angkeara Brang
Business: Angkeara Bridal
Hometown: Phnom Penh, Cambodia, now living in Long Beach
How long have you lived in Long Beach? ten years
How long have you had this costume business? for 5 months. It is still new.
How long does it take to make a costume? usually 3 days to sew
Where did you learn to sew? I learned in Phnom Penh. I began sewing when I was 18 years old. I also worked in Malaysia and New Zealand.
Where do you get your fabric? I import most things from Cambodia, but I also have a shop here in Long Beach (1638 E. Anaheim St.)
And the metal pieces? I import those from Cambodia also, but I do the designs myself or give the designs for them to be made
Who are your customers? Most are for dance and bridal
How can we find your work? I have a website; we are still working on it. www.angkeara.com

under the lights at nokia

Thank you all for your comments! I've got some nice shots, but ahhh I can't show them because they are reserved for future promos. Anyhow hope this will suffice. How about some zebra print? 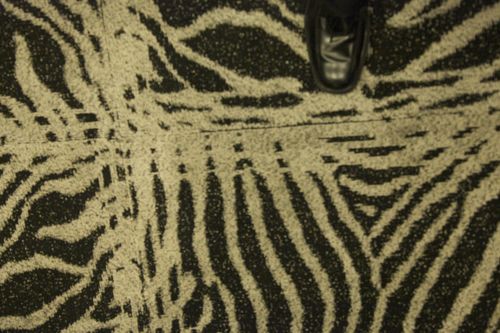 E had her own huge dressing room with snazzy print floors.
It brought out the rockstar in us; we had to throw a couple lamps. hehe 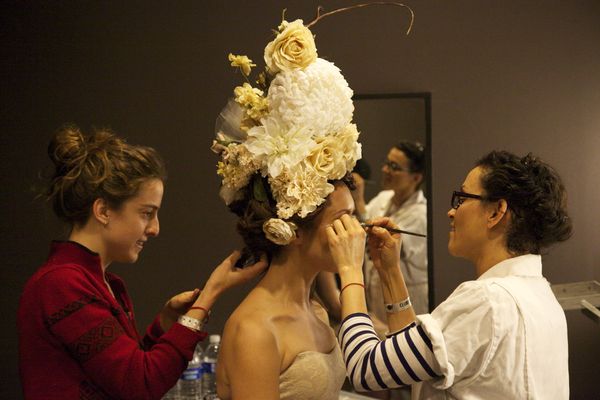 Getting the head piece on...
Her make-up artist for this show (Marian Filali) created some pretty incredible feather lashes. 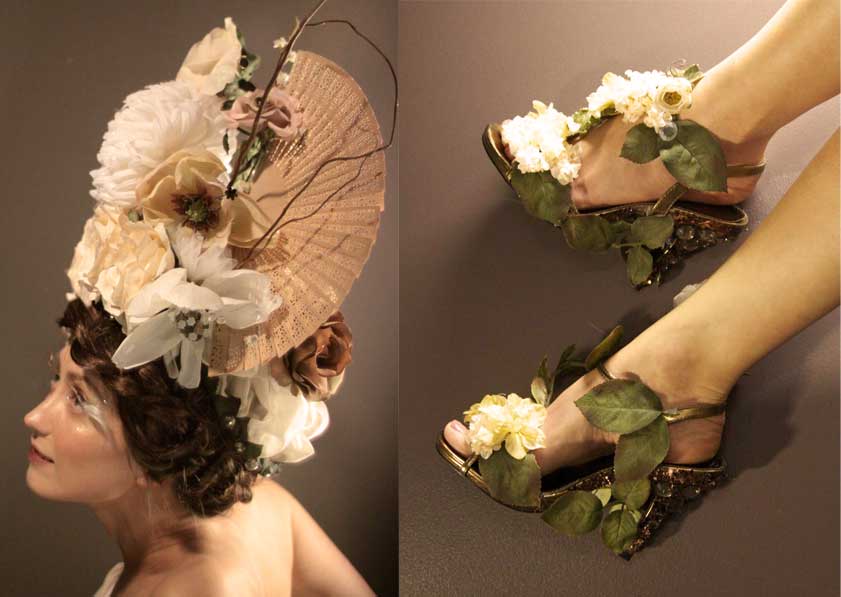 and here are the designs! Those shoes are so fun to wear. 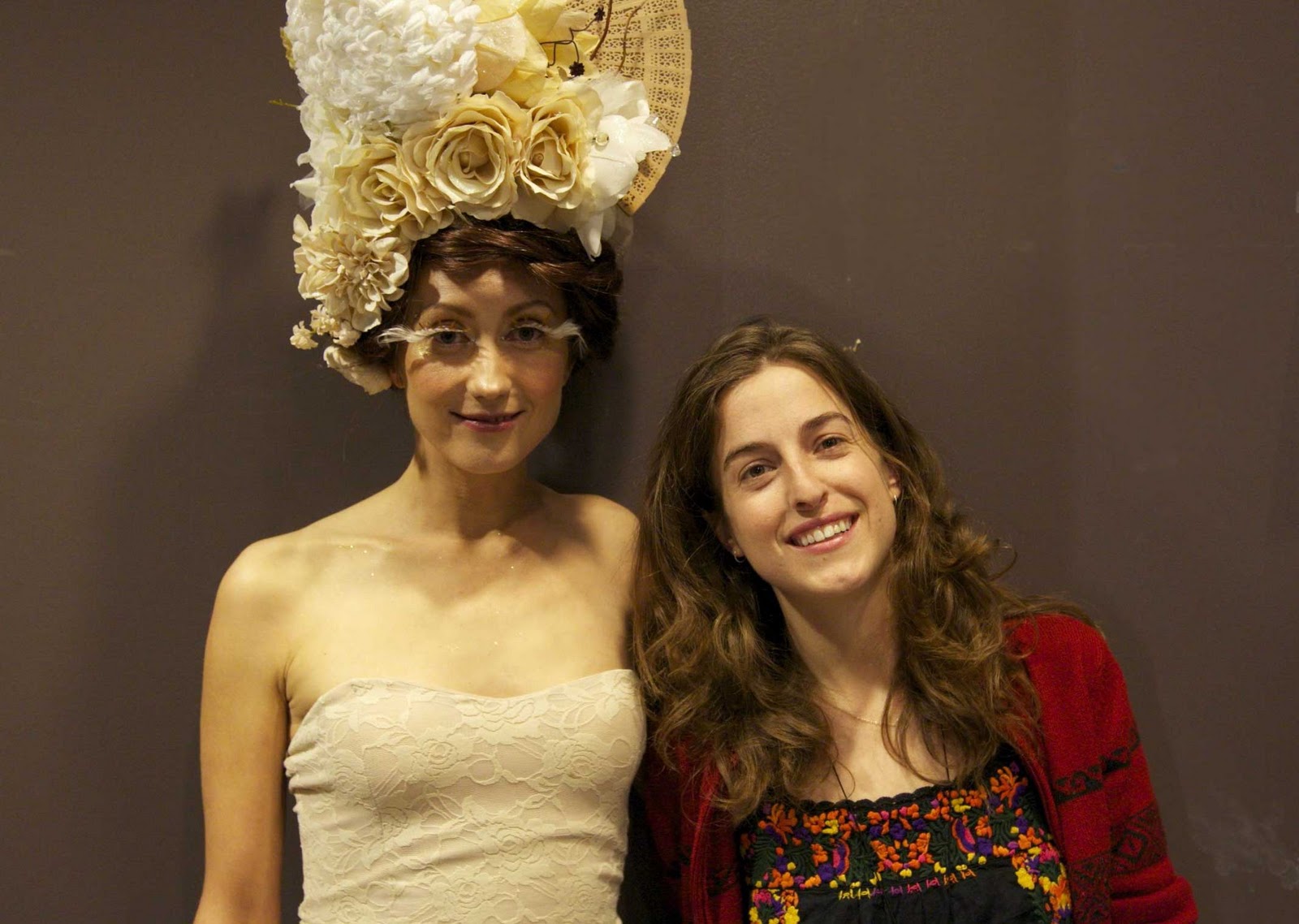 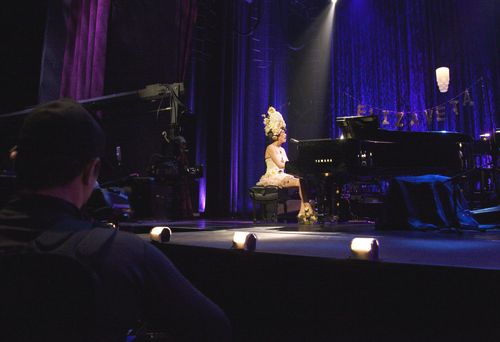 Officially the unofficial photographer: the managers said I could get on the other side of the stage and photograph from the curtain. The problem though.. a huge piano. My only shot would be black enamel.

I got in the front and dodged the camera crew. It was kind of funny moving with the rig guys, trying not to mess up their kazillion dollar shots. Every once in a while the crew turned the cameras and panned on the crowd. When that happened, I had to jump in a seat and look normal. At one point I thought they were done panning so I hopped up. Just then they turned and BAM I was caught in the shot. Elly's manager said, he was watching the stage then looked up at the big screens just in time to see my deer in headlights look. 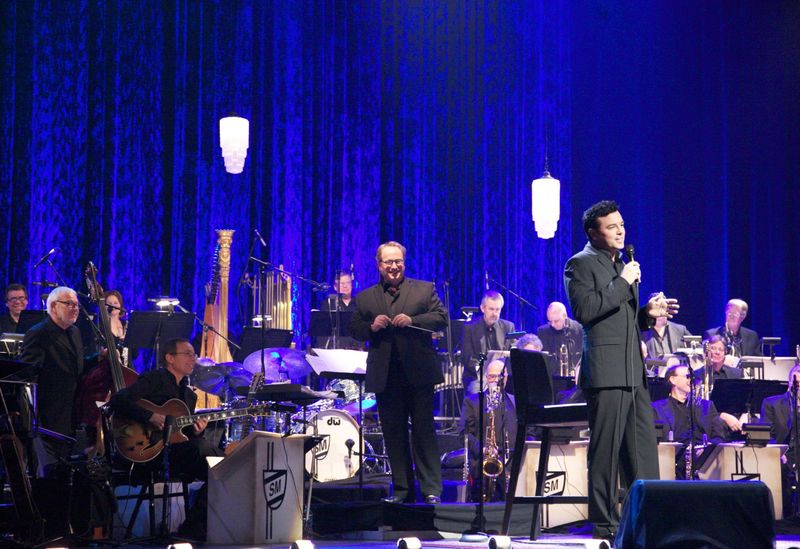 Seth MacFarlane crooned away for the rest of the night. (Note the conductor is Joel - the wizard from the other studio shots). The band was fantastic. You don't often hear that quality of jazz and big band live.

Before MacFarlane came out on the stage, you should know the emcee got up and had the audience do a couple fake laughs for the cameras and then some wild clapping that would be later spliced into the final edited version. Got to love the fabricated laugh tracks. Especially when Seth came out on stage talking about how he and Elizaveta had a problem, because they both ended up wearing the same hat to the show that night. Funny Guy or not, there is something to be said for making a scene. Sara Bareilles performed all of the duets in the show with MacFarlane, but the reviews from KPCC the next day didn't even mention her. Instead they dedicated a lengthy passage to Elizaveta. I guess when you get your chance, you have to go for it. 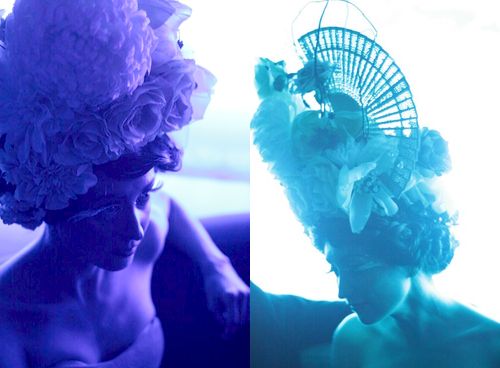 *(Listening to nothing but Steve Marriott this week)
4 comments