Photos from the show at Bergamot

Saturday at Berg was the place to be. It was one happening thing after another. 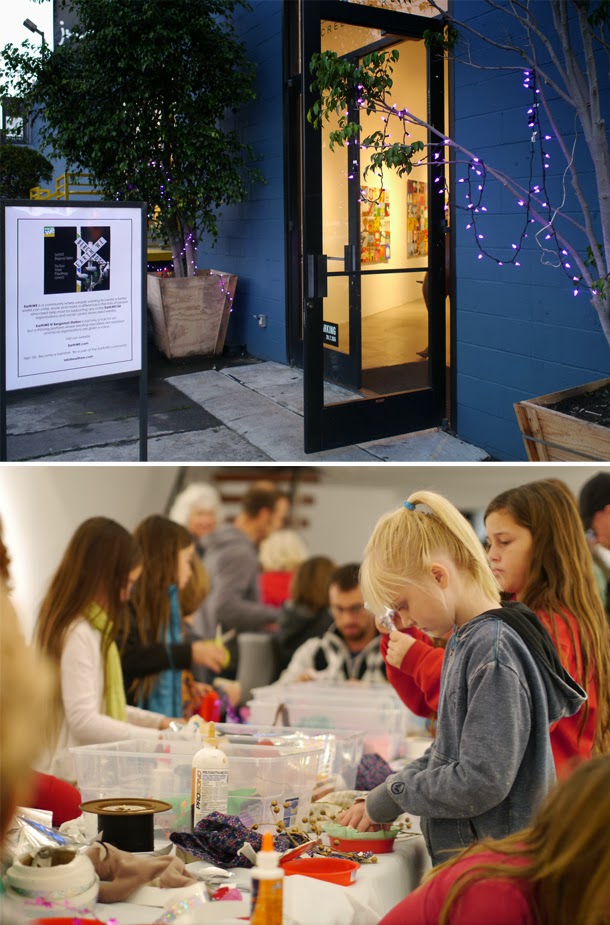 We started out small with a couple of little ones making Christmas ornaments.

The first little girl was so delighted with the result, I knew it was going to be a big fun. Soon there were kids pouring in and parents hunting for used materials. I picked through the warehouse of goods at reDiscover this morning to find the perfect mix of "trash" to resurrect into art. I was confident that there would be some magic happening. 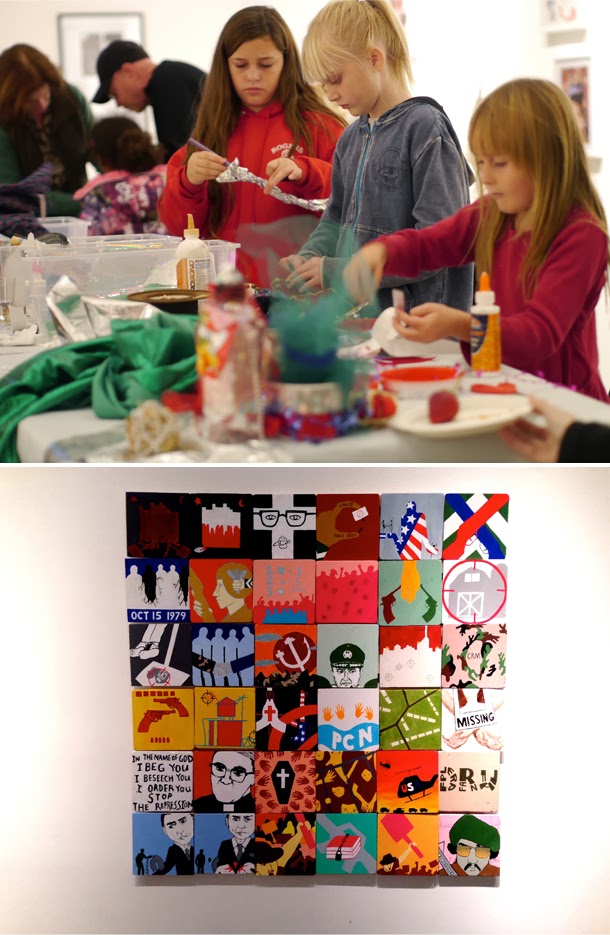 The tiles made it on to the wall. After a rough start, that's saying a lot. Each tile is slightly irregular because they are hand poured, and the hooks, though lined up and embedded into the plaster, are slightly off. So the whole thing had to be measured piece by piece, which I did on Wednesday. It was a crowning achievement to see them all up. 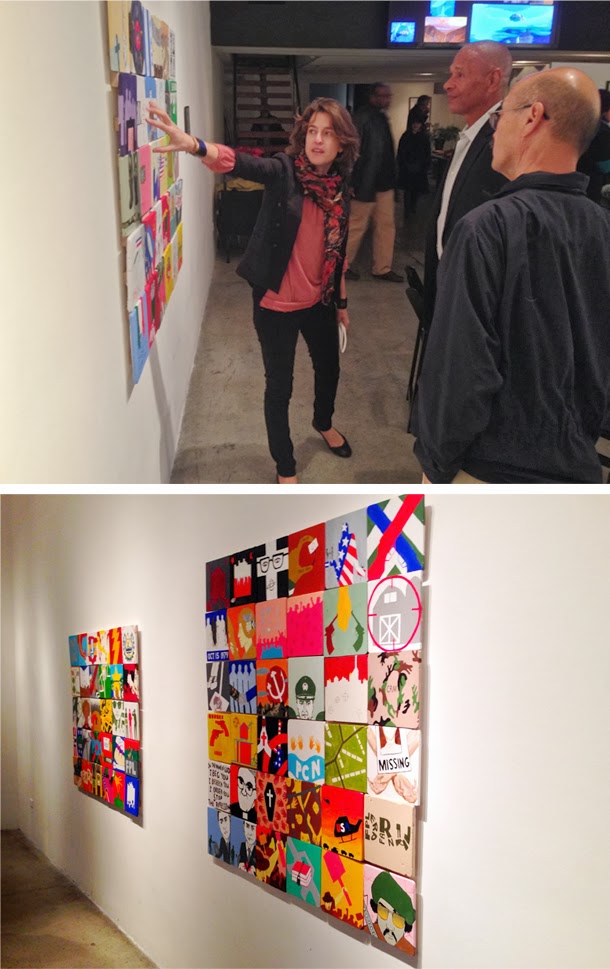 Explaining the whole concept to everyone was a good challenge.

Each tile represents a significant event in El Salvadoran history, ranging from the birth of the nation to the devastating repression, which left over 75,000 Salvadorans dead, many indiscriminately killed by para-military operations looking to keep control over the small nation during the major power struggle of the Cold War.

El Salvador was one of the first places that I visited out of the US; I became fascinated by its history and later engulfed in the challenge of depicting a complicated, politically-charged story through images.

To help in the deciphering, I have a book that goes along with the exhibit that gives the year and details behind each image. 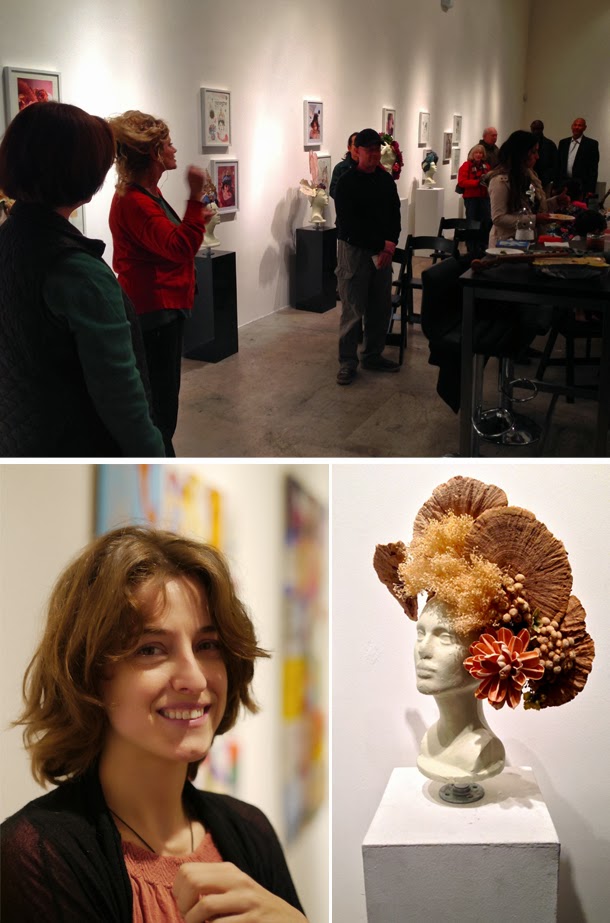 AND on the other side of the room - wood nymphs and fairies. haha. Seriously, when we were planning the show, I was doubtful that the walls would make sense with such.. let's say "diverse" work.

The string that was supposed to tie it all together was my sketchbooks.

The theme of the night was reusing materials..
Supporting the mission of reDiscover..
Doing an activity with kids that emphasized reused materials..
Exhibiting my headdresses which use quite a lot of second-hand materials..
And screening a sneak peak at the documentary Landfill Harmonic about a group that uses trash to make instruments.

The sketchbooks tie it all in by talking about the landfills of Cambodia and travels in El Salvador along with the tiles showing the history of El Salvador. See it kind of works... but we couldn't get any glass cases, so the sketchbooks had to wait. And therefore the show has a missing link and is a lovely mix of disparity.

Actually I was told that one woman was really pleased with the opposing walls, saying 'this is real, this is how it really is, we are not just one thing." I was happy to hear that because, well, it's true. We are not.

Human rights and geography aside, the headpieces are purely artistic and fantastical. I like to take an idea like a character from a novel and try to make something that represents that story. If you've been here a while, you know they have been worn extensively by Elizaveta.

I also displayed some sketches and notes about the creation of the pieces, and images from some of the photo shoots where they have been used. 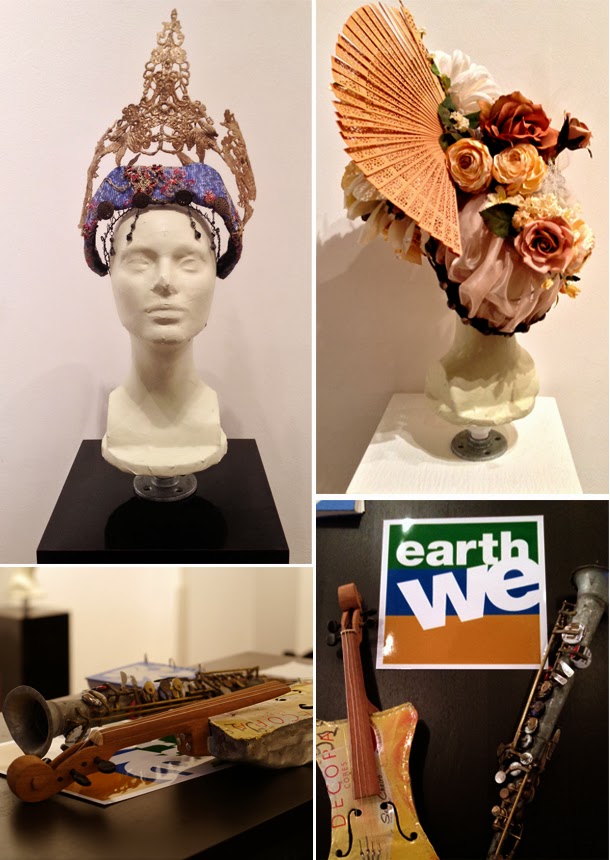 We screened the first peak of the documentary Landfill Harmonic and actually had the filmmakers in the room answering questions and showing us some of the real instruments from the documentary. It was one of the most inspirational things I've seen in a while. Check out the trailer below, to get the idea. They've been raising funds with Kickstarter to bring the orchestra to the US for a tour, which will no doubt be incredible.

A couple of instagrams from the night. 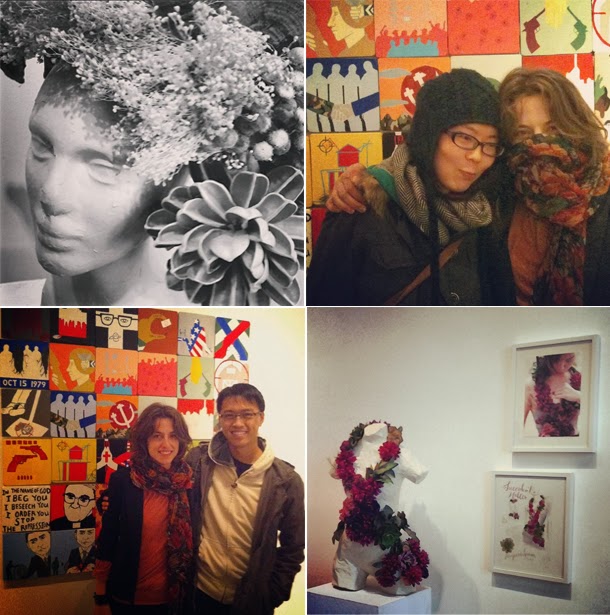 We were all freezing in the 45F weather. Mie almost didn't make it.

I enjoyed meeting tons of new people, but also loved having all of my friends come out for the night to show their support. 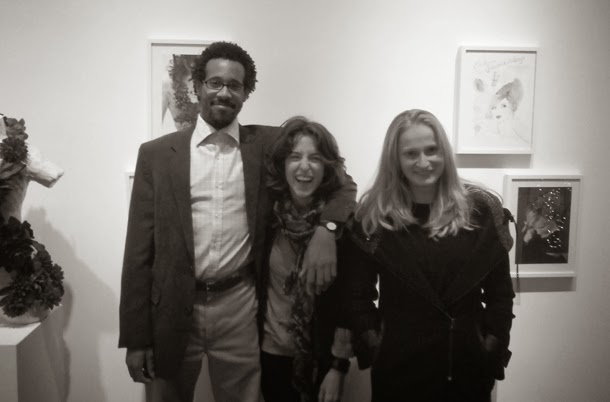 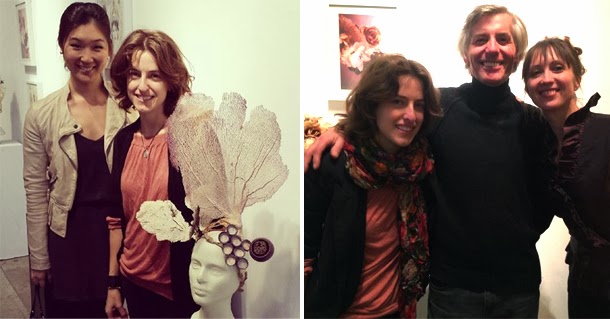 Elizaveta performed some live music later on, which sounded outstanding with the acoustics of the gallery. Robert pranced by saying, "there will be chocolate!" So that basically tipped the scale. It was peppermint, my favorite.

Topping off with some late night sushi, something LA does best : )

Thanks for checking out the stuff and sticking around until the end of this long post with way to many pictures of my mug.